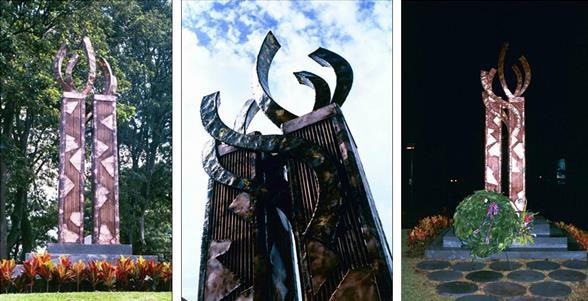 This 14 foot high sculpture was accomplished to honor those lost in the tragic event of September 11, 2001 in New York. It is meant to symbolize the spirits of those lost rising to another place. Approval, materials, and arrangements were sponsored by the United States Embassy, Costa Rican – North American Cultural Center, Am Cham ( the Costa Rican – North American Chamber of Commerce ), the colony of resident Americans in Costa Rica and the Municipality of San Jose. The artist was pleased to donate his time to this meaningful project.

The sculpture was designed and built of Copper in the artist’s home studio in Panama City Beach, Florida. It took approximately 4 months to build plus planning which allowed for the sculpture to be constructed and disassembled into small sections for reassembly on site in San Jose, Costa Rica. It was then reassembled on site in the September 11, Memorial Park adjacent to Centro Cultural in Sabana Norte. Dedicated on September 11, 2004 it stands as a tribute to friendship and solidarity expressed between our two democracies.

In the words of the Charge d’ Affairs of the United States Embassy, Mr. Douglas Barnes, “It is a touching and powerful work that serves to both preserve the memories of the victims of September 11 and act as a tremendous symbol of the strong ties between the people of Costa Rica and the United States”. 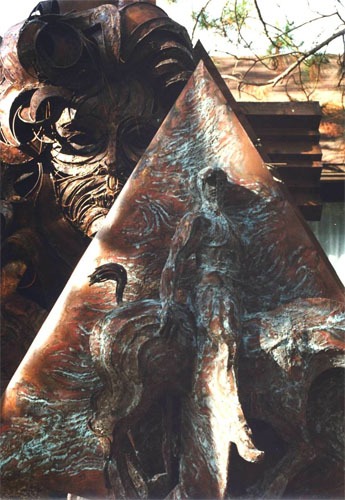 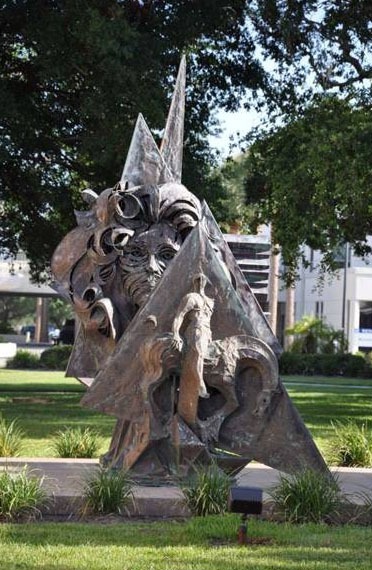 Originally NEW LIBERTY III was designed and accepted for installation in Spain through the auspices of Costa Rican Ambassador to Spain: Dr. Rose Marie Karpinski and later by Dr. Horst Haarkotter, Costa Rica Consul in Spain, Canary Islands, Spain. It was originally to serve as a gift to Spain from Florida, Costa Rica, and the Artist.

After the tragic event of September 11, 2001 in New York, it was decided by the artist to donate this NEW LIBERTY III sculpture to Gulf Coast State College and respectfully install this sculpture here in Florida.

NEW LIBERTY III was made possible by grants from the Florida Division of Cultural Affairs; the Gulf Coast State College Foundation; a patron; Mrs. Lucy Hilton and funds and efforts of the Artist.

A plaque for the project was provided in memory of Gerald Castardo by Mrs. Barbara Castardo 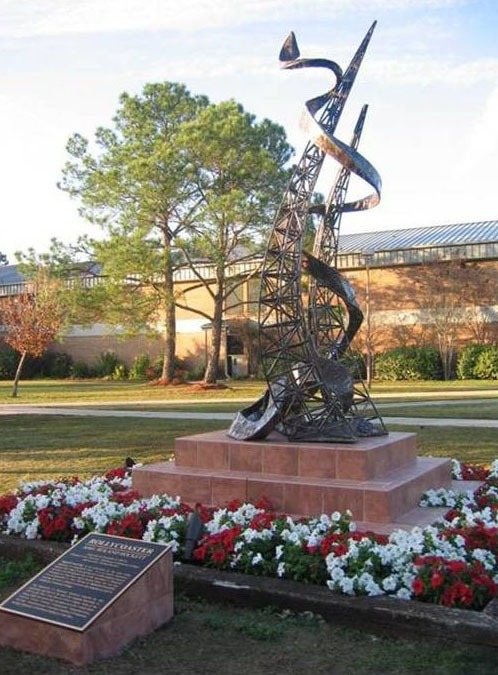 This sculpture was dedicated on December 8, 2005 by William D. Law, President of Tallahassee Community College in Tallahassee, Florida.  Due to its special importance, the artist presented this sculpture to the college as a gift.

‘RollyCoaster’ is an experiment in triangulated form. Its early stages served to inspire the development of the September 11, Memorial Sculpture which was accomplished by the artist under the auspices of the United States Embassy. That sculpture is installed in San Jose, Costa Rica.

RollyCoaster, Copper sculpture 12’ in height, Tallahassee Community College, Tallahassee, Florida.
In process photos of ‘RollyCoaster’ show triangulation in each section of the sculpture which adds to its strength. Tubes on the bottom are epoxied into the base. Lighting glare is blocked by the height of the base. 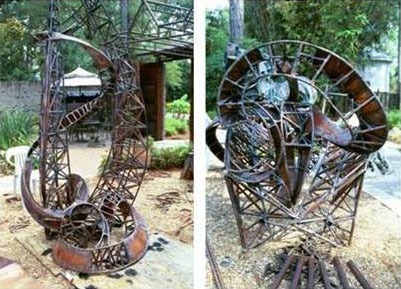 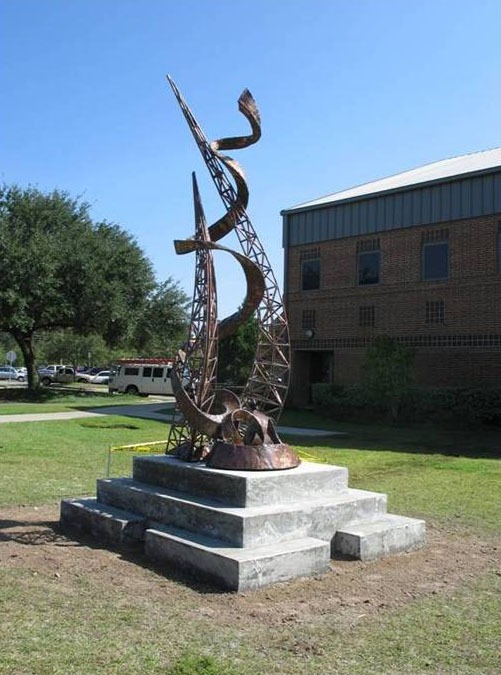 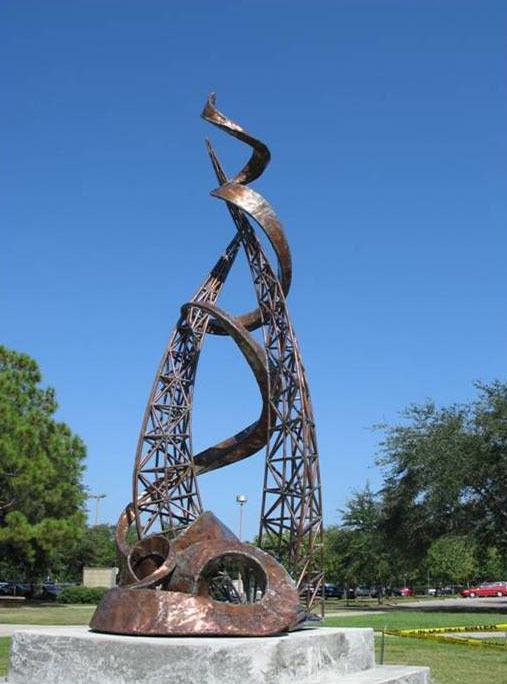 EAGLE (One of two for the Florida Supreme Court building )

The EAGLES were designed for specific areas and symbolize the strength of America and a sense of freedom. The rhythmic movements suggesting freedom are covered in a green patina which relates the sculptures to the green marble columns supporting the main rotunda. The spaces and forms of the eagles create a sense of movement and strength.

Florida Supreme Court Justice Rosemary Barkett stated that "They are wonderful and a great addition to the rotunda area of the Courthouse. Mr. Hockett’s eagles capture the spirit of freedom and independence, which is what the Court is here to protect. " 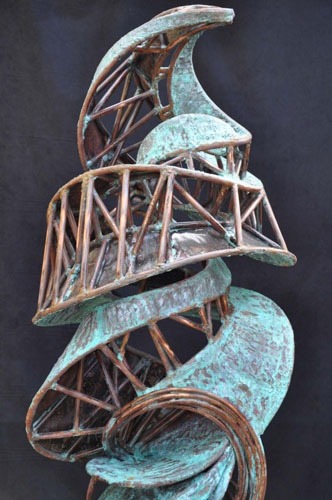 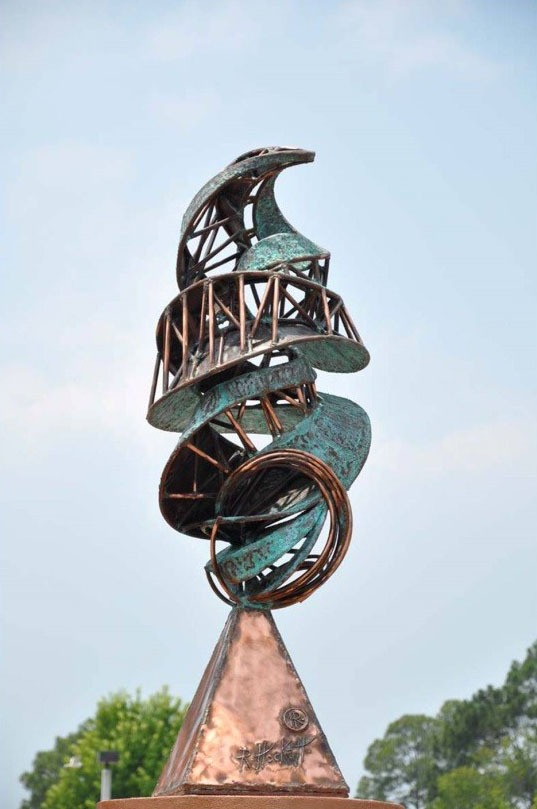 SHARON’S SHELL is a copper sculpture 7 foot high and installed on a six foot pedestal to serve as the focal point in the central circular drive within a housing development in Lynn Haven, Florida.

The artist wished to triangulate a spiral for the form and alternate patina areas with clear areas on the copper to create this unique and striking accent to the site. 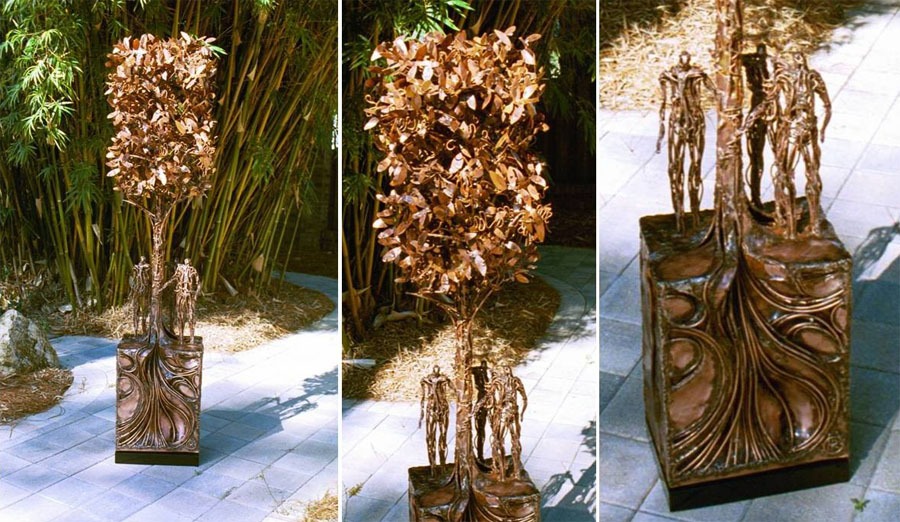 This sculpture was accomplished for the U.S. Ambassador’s office reception area at the U.S Embassy in San Jose, Costa Rica. It is built of copper mounted on a black marble base. It is 6 foot high, 10 inches deep and 14 inches wide. Shipped in three sections it was joined together at the site. The polished surface is coated to reduce the effect of tarnishing.

The theme relates to the Ceiba tree legend and the story that the roots of that tree are connected to the soul and spirit of the people. Thus it was a positive project producing a beautiful sculpture that relates in a meaningful way to the country and people nearby. 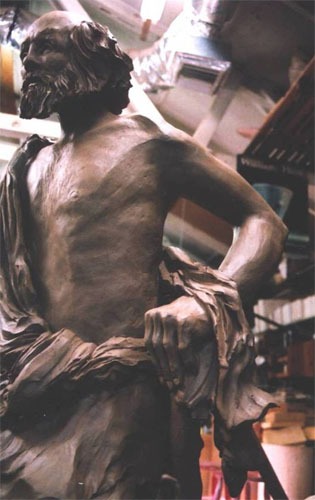 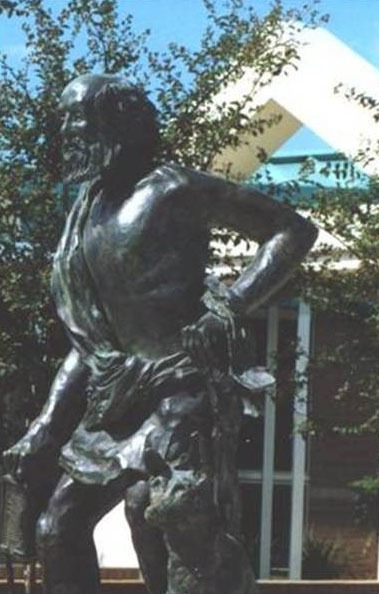 DIOGENES is a five foot bronze installed in the courtyard of Patronis elementary school in Panama City Beach, Florida.

Using the Ceramic shell casting system it was cast in silica bronze in 2005 it represents the Greek philosopher Diogenes. The sculpture is accomplished in a style and patina similar to early bronze in 4th century B.C. 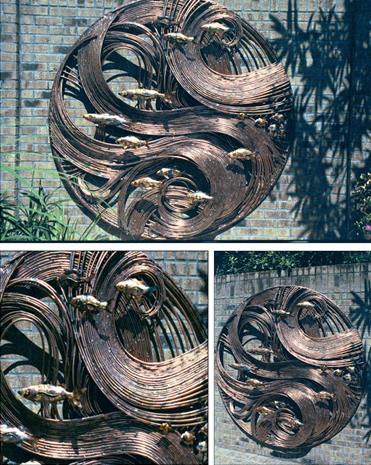 This sculpture is one of four large sculptures for the Captains room in Capt. Anderson’s Restaurant in Panama City Beach, Florida.

It is one of three 6 foot circles in addition to a rectangular composition reaching to the ceiling and 4 vertical sculptures on the opposite wall. This collection of sculpture in the Captain’s room relates well to the theme of the Sea and adds a warmth and richness to this large and popular well known restaurant 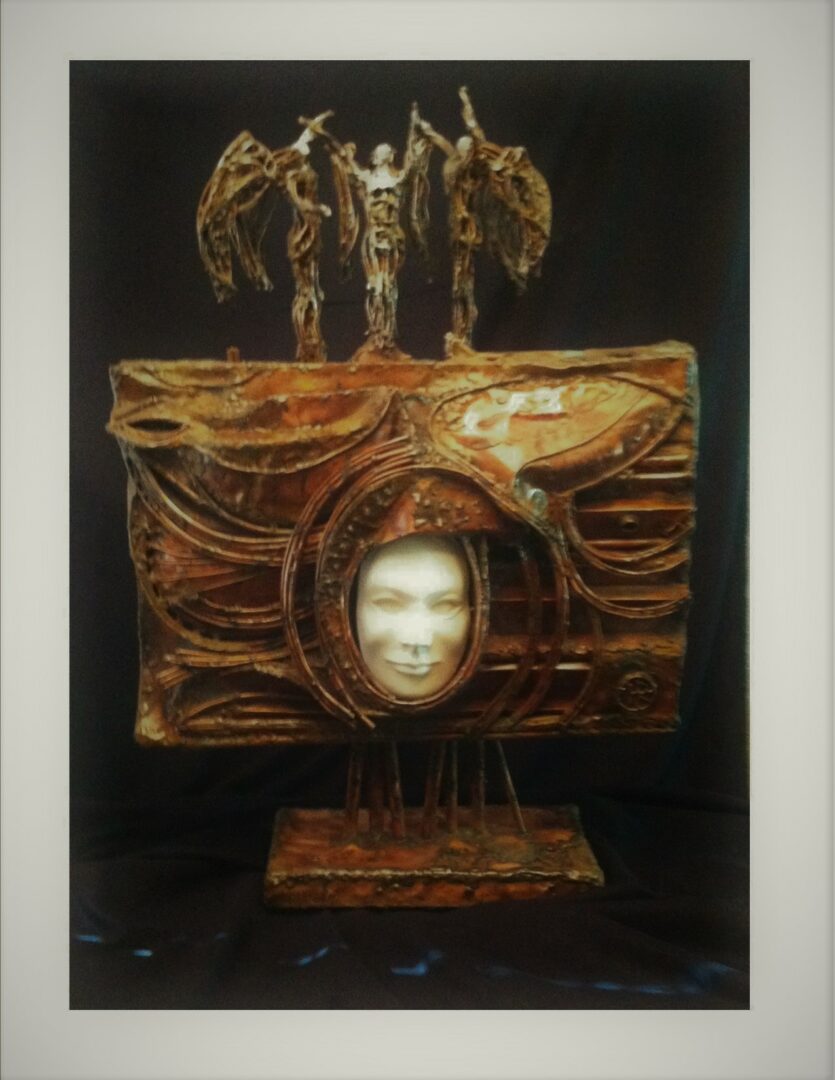 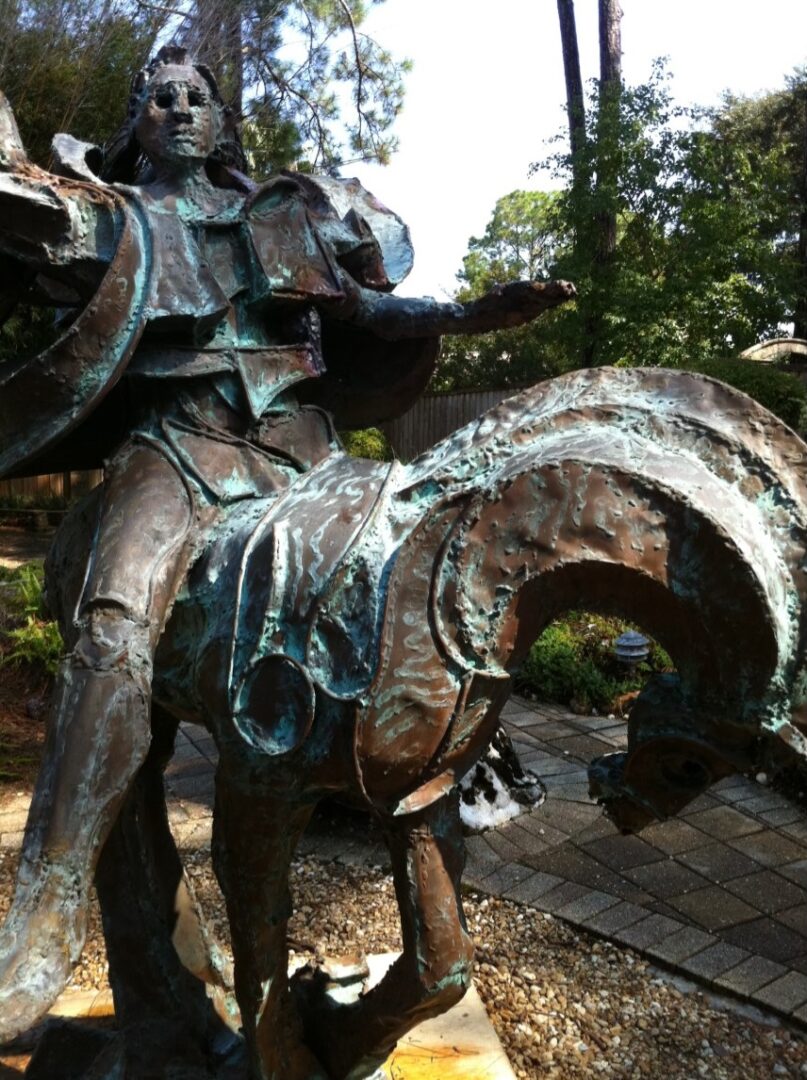 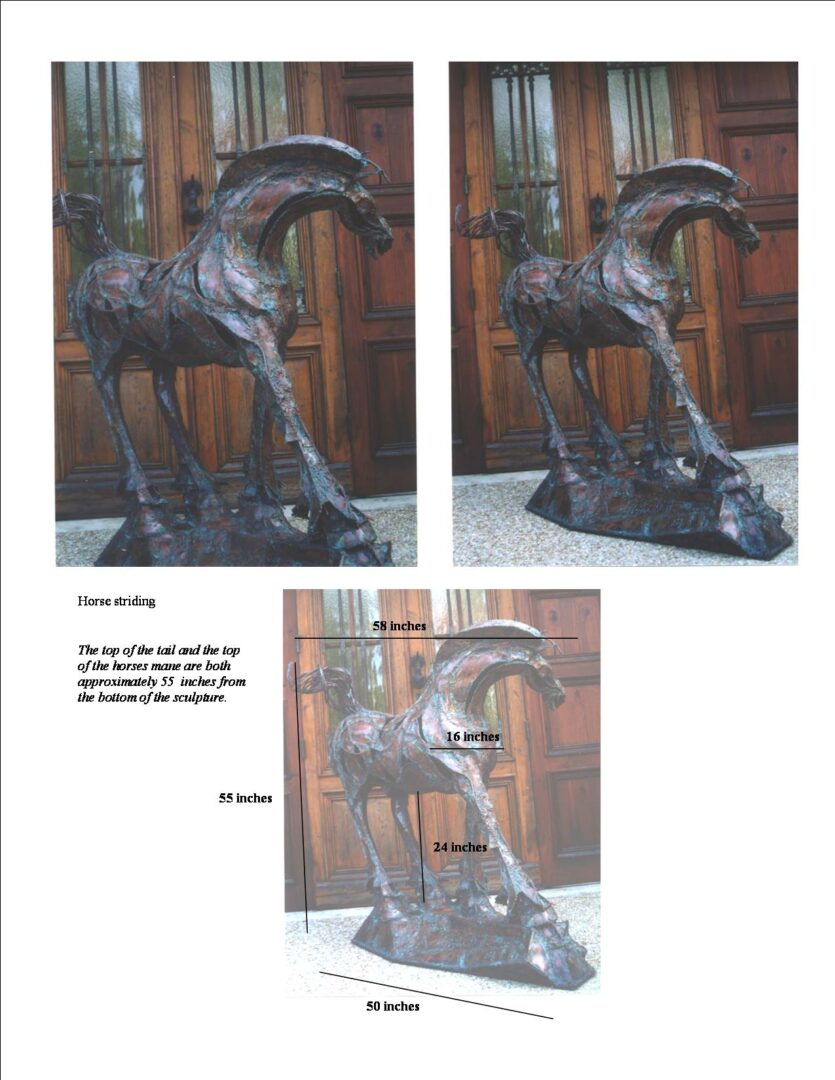 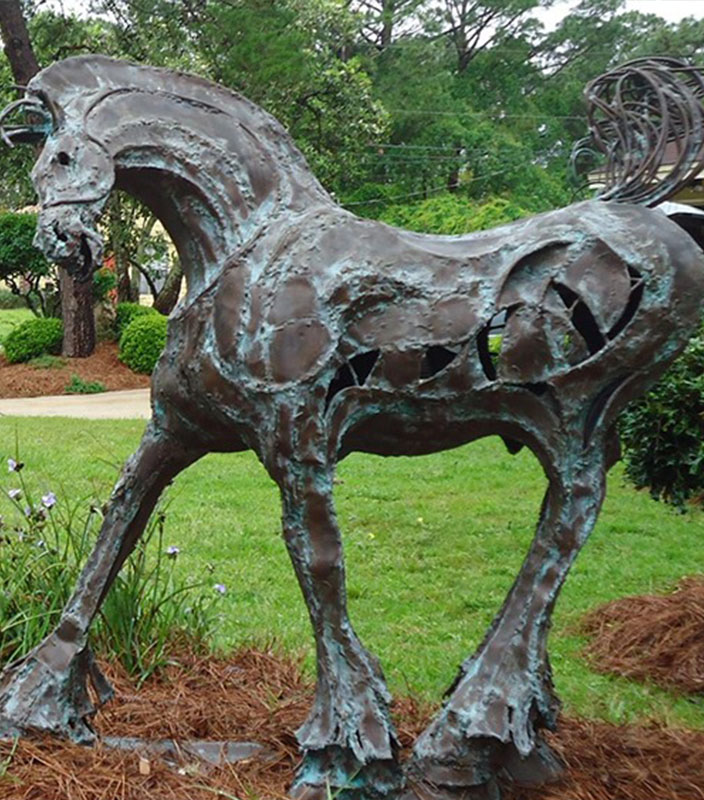 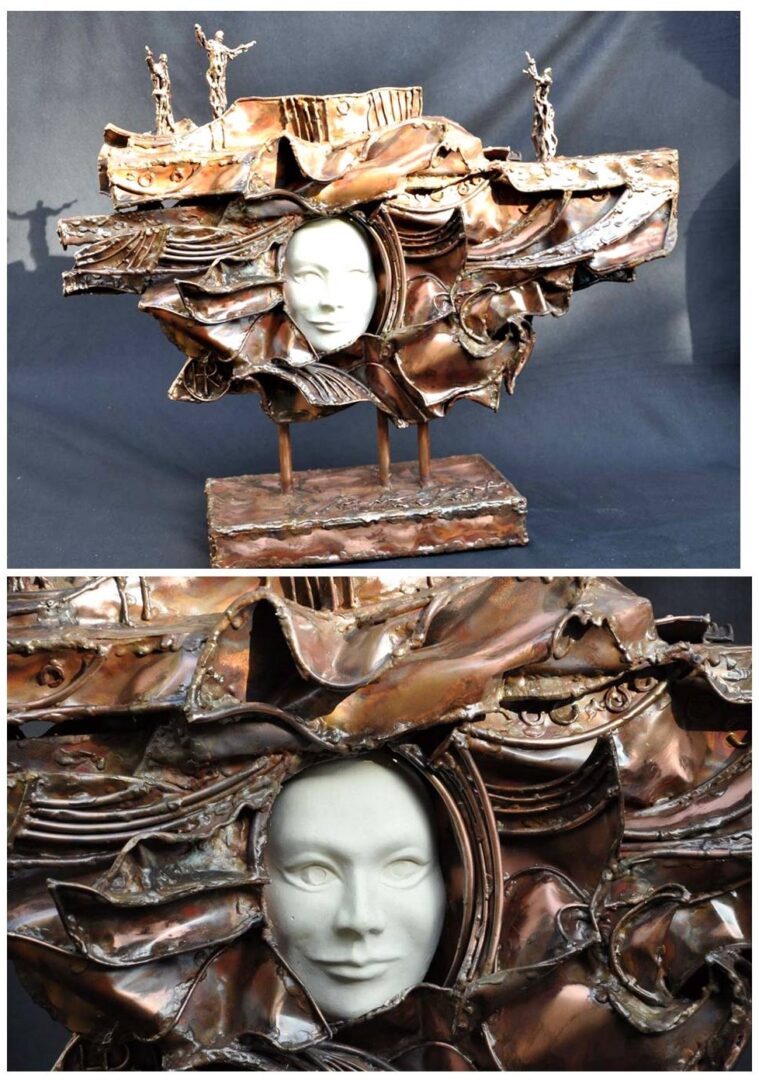 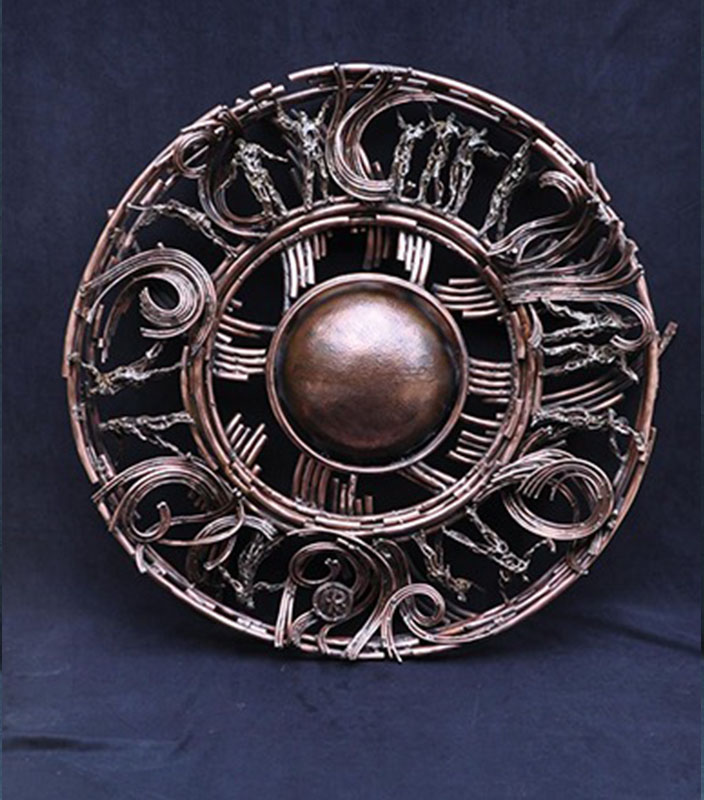 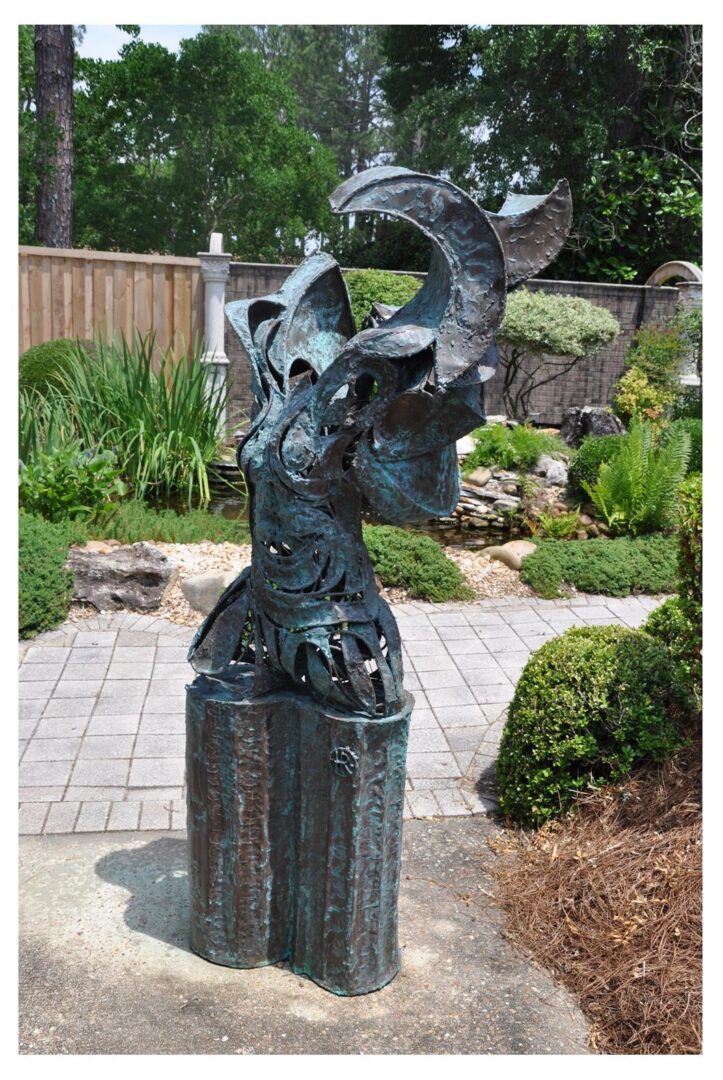 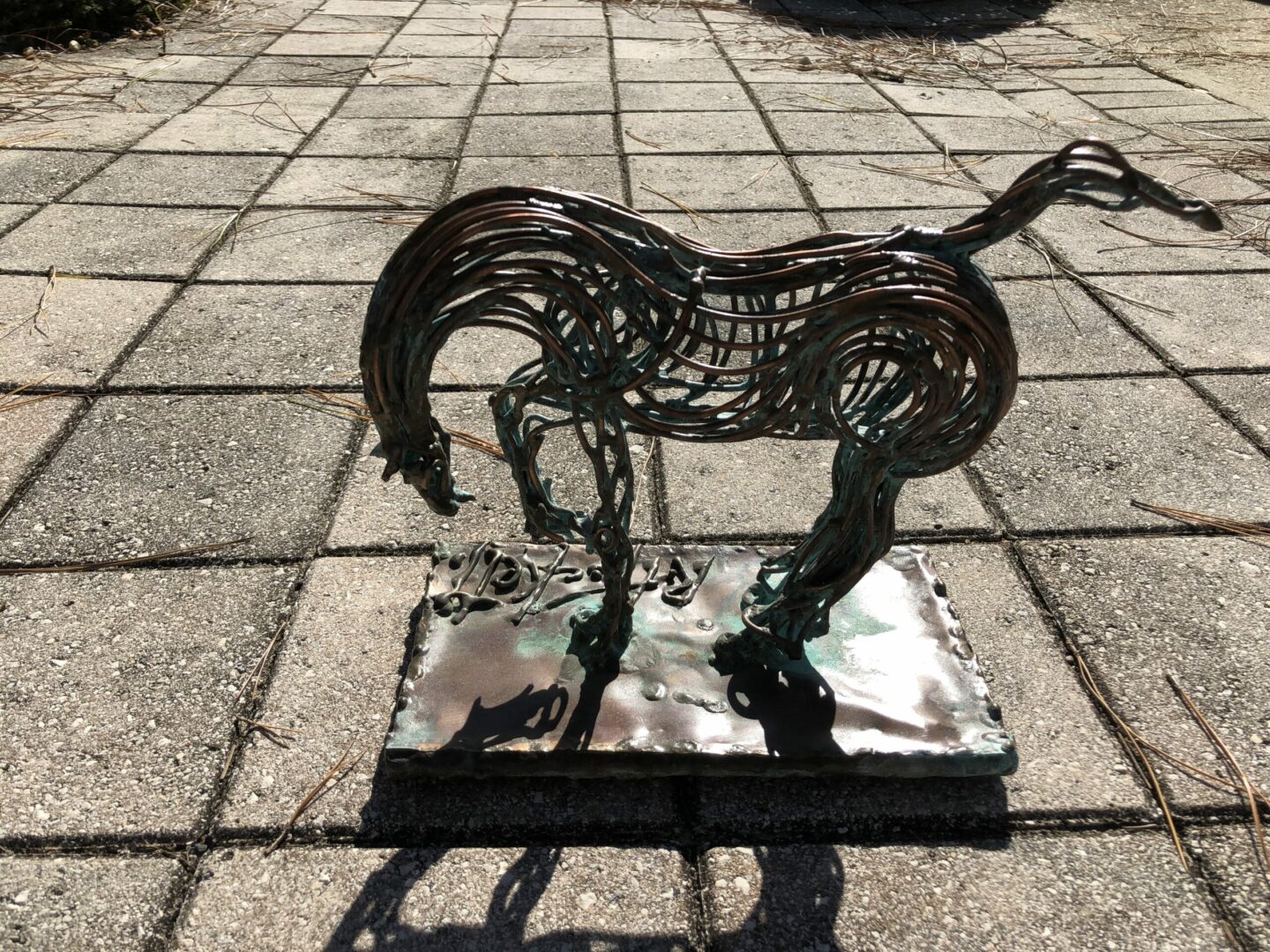